Meteorological and climatic
services for businesses

Service and product marketing is a strategic priority for Météo-France, which is committed to making its expertise available in ever more customised formats for the various activity sectors and to supporting its customers and informing decision-making ever more effectively in terms of climate change and severe weather. This business-oriented strategy particularly relies on the development of partnerships. In 2016 it enabled an overall accounting result of €29.14m to be achieved and a 0.7% upswing in professional revenue, with particularly strong growth on the French market (over 2%). This result cements the institution’s lead on the meteorological and climatic service market. 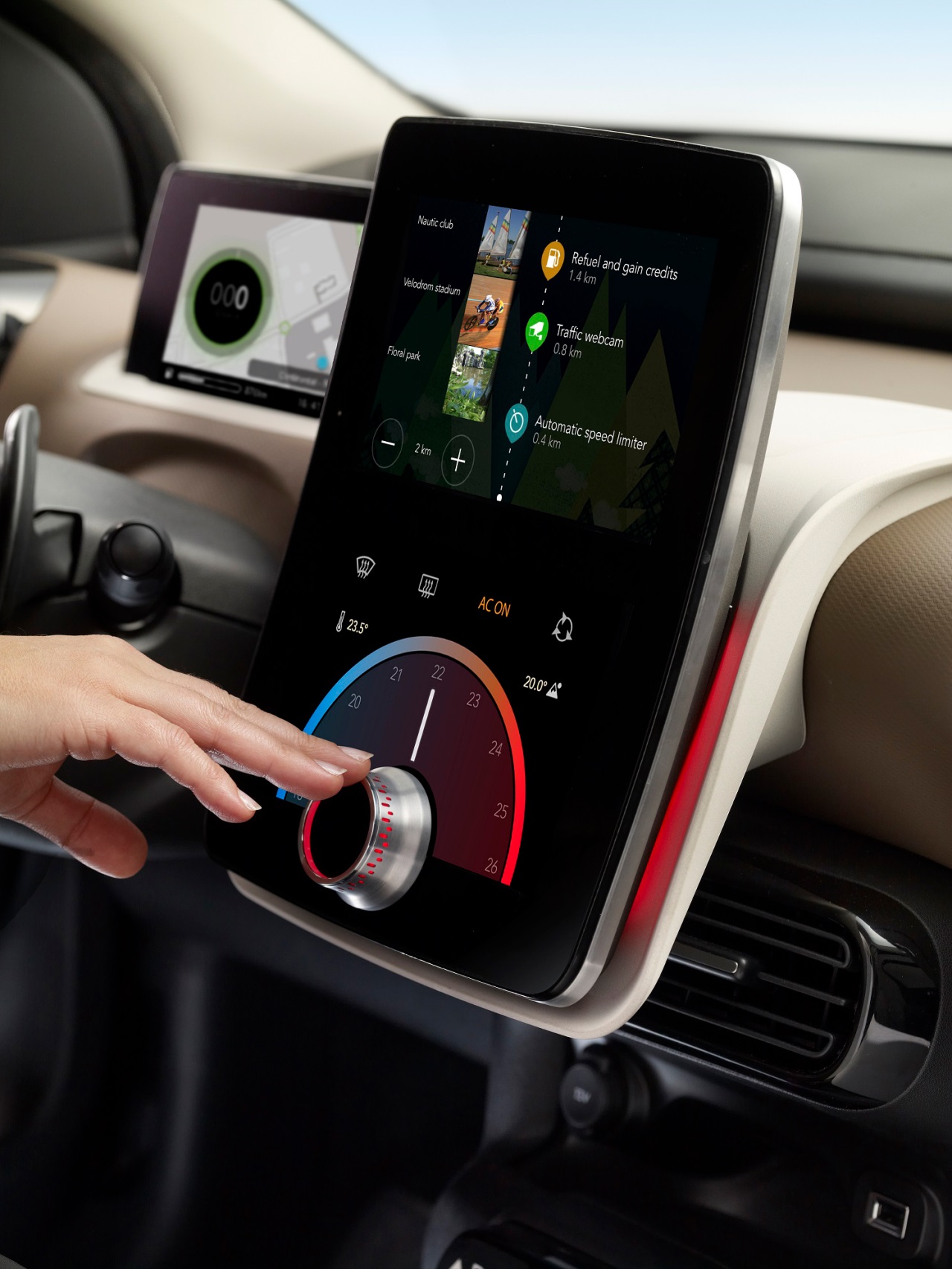 In March 2016, Météo-France forged a partnership with automotive manufacturer Continental to develop a forecasting system which incorporates data from connected vehicles in real time: eHorizon Weather. For Météo-France, the aim is twofold: to improve the quality of its short-range forecasts and of its observation network by retrieving data from smart vehicles (air temperature, activation of traction control for the condition of the road surface, activation and speed of windscreen wipers for precipitation, headlights for visibility and so on) and to develop innovative services and products for road users. For Continental, this is a way to share forecasts and weather warnings with drivers based on Météo-France’s nowcasting flows via the on-board computers. Following the initial tests in 2016, a larger trial on 200 vehicles was conducted during the winter campaign. The purpose of this was to assess the quality and interest of the data collected by the vehicles and its sampling (representativeness, spatial and temporal aggregation, etc.) as well as the quality of the on-board warnings.

The second Innovation Awards competition organized by Auto Moto magazine in December 2016 singled out eHorizon Weather as a winner in the “Manufacturers” category.

In July 2016, Météo-France signed a five-year partnership agreement with Arvalis, the French arable crops R&D institute, to develop the agro-meteorology service Taméo®. Available on tablet, desktop and smartphone, this tool provides farmers with agronomic and meteorological information in real time at the scale of their plots. This information bears on the weather (for the last five days, in real time and nowcasts, weather forecasts for up to nine days), on the crop stage and the risk of diseases emerging, with a view to advising users of when the best time is to fertilize, weed and protect their crops. Although the current version only concerns bread wheat, there are already plans to add new varieties.

Taméo received accolades during the SIMA Innovation Awards ceremony in Paris on 24 November. This is a world-renowned competition focusing on the most innovative agricultural services, techniques, products and equipment. 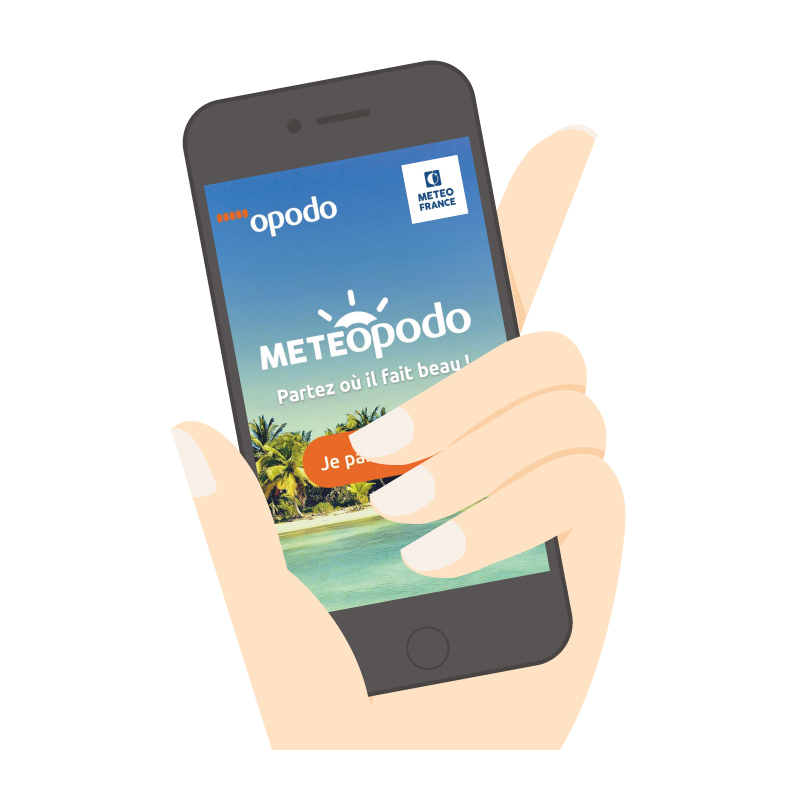 Where can you go to get some sun in February ? A weekend in Biarritz or an away break in Corsica ? Météo-France and the travel firm Opodo, no. 1 in Europe and no. 2 on the world stage for travel (grouping together Go Voyages, Edreams, Travel Links and Liligo), have clubbed together to set up the first ever online platform for booking holidays based on the weather. Launched on 25 October, MétéOpodo enables Internet users to choose their destination based on meteorological criteria. After selecting their city of departure and travel dates, users are asked to specify the weather conditions (temperatures, wind, cloud cover, precipitation) they’d like best for their trip. In return, the platform indicates the destination results that match their search, based on ten-day forecasts and climatological data beyond that.

Supporting businesses in the Upper Rhine

Launched in February 2016 for a three-year period, the Franco-German-Swiss INTERREG V* project Clim’Ability aims to give businesses in the Upper Rhine the means to adapt their strategies and processes to expected climate change. Knowledge, innovation, management and reduction of risks form the mainstays of this original initiative which is intended to be rolled out across the whole territory.

One of the main challenges is to pinpoint and analyse the region’s vulnerabilities to climate change and identify potential resilience factors. A multidisciplinary team of geographic climatologists, sociologists, economists, advisors at the Alsace Chamber of Commerce and Industry (CCI) and pilot companies has been put together.

The initiative’s sociological focus involves interviews with the policy officers of territorial climate-energy plans, engineering departments and companies with the main aim of assessing the extent to which businesses have taken climate change on board, jointly coming up with adaptation strategies and developing solutions for reducing vulnerabilities.

Coordinated by the North-East Management, Météo-France’s contribution also calls on the French National School of Meteorology (ENM) and the institution’s climatic services and commercial divisions.

* The programming zone for the INTERREG V project spans French (the Alsace départements of Haut-Rhin and Bas-Rhin in the Grand Est region), German and Swiss territories.

Météo-France has been a partner to the Regional Observatory for Agriculture and Climate Change (ORACLE) ever since it was first founded by the Poitou-Charentes Regional Chamber of Agriculture back in 2011. In 2016, the institution increased its involvement in the sector by signing a three-year framework agreement with the Standing Assembly of the Chambers of Agriculture (APCA), extended to the regions of Nouvelle Aquitaine, Pays de la Loire, Normandy, Grand Est and Centre-Val de Loire.

The ORACLE observatories’ mission is to help the agricultural sector, through observation, to get a clearer grasp of current and future climate change and to take these changes on board in their decision-making, for the purposes of adaptation and mitigation.

In this context, Météo-France provides climatic indicators bearing on an array of parameters (such as temperature and precipitation), but above all agro-climatic indicators that have been developed jointly with the Chambers of Agriculture: exceeding temperature thresholds, cool nights for viticulture or a combination of temperature with variable durations and thresholds so that the feasibility of a given crop can be ascertained.

This partnership illustrates the importance Météo-France attaches to a targeted climatic offering at local level, developed together with the sector’s stakeholders.

As part of the European project EUPORIAS (European Provision Of Regional Impacts Assessments on Seasonal and Decadal Timescales), Météo-France has developed a prototype for forecasting water resources in France at seasonal intervals. Its decision-making contribution has been assessed through cooperation with the Basin Territorial Public Institution (EPTB) Seine Grands Lacs based on a reanalysis of the past 29 years.

In 2016, the final year of the project focused on a real-time trial run of the service on the Seine and Garonne, especially in June when strategic decisions are made regarding low-flow level targets.
At users’ request, seasonal forecasts have been presented in comparison with climatology and climatological forecasts (reanalysis of the past 24 years with the initial hydrological status of the year in question).

Discussions have also been held with a view to supplementing the data available. Thanks to these, information on the hydrological context for the year in question has been added along with confidence indicators based both on the historical resimulation and the predictability of seasonal forecasts for a specific basin and month.

Work will continue in 2017 to prepare for the service’s commissioning.

In 2016 Météo-France cemented its position as an authoritative voice on the support for the sports sector market, particularly by continuing to develop this activity abroad.

For the tennis grand slams like Wimbledon and Roland Garros, Météo-France Sports has lent nowcasting assistance to the organizer of the US Open tournament, not least by installing a mobile radar in New York.

2016 also saw the UEFA Euro 2016 being organized in France, an event for which Météo-France delivered a dedicated service. Weather forecasters were brought in to offer their expertise in the International Broadcast Center at Paris-Porte de Versailles and assistance was set up for each of the ten host cities and the 24 participant base camps.

Last but not least, motor sport was yet another discipline in which a number of Météo-France Sports experts got involved, especially by supporting several teams during the world rally (Citroën, Hyundai, M-Sport) and endurance (Porsche, Audi and Toyota) championships – not to mention the International Federation for Motor Sport (FIA). In 2016, Météo-France was also awarded the tender for delivering weather assistance to the World Formula 1 Championships. Its forecasters will be busy working at all of the scheduled races of the king of motor sport in 2017.

Within the Météo-France Group, 2016 was a year of transition for Meteo France International (MFI), after Egis Avia parted ways with its capital at the end of 2015. A great deal of effort has been invested in finalizing contracts for flagship projects which should bear fruit through 2017. 2016 also saw the Geode4D/SysEnv invitation to tender, organized by the General Defence Procurement Directorate, being awarded jointly to MFI and Airbus Defence and Space (AD&S). This is strong recognition indeed of MFI’s acumen and skill set and will help to showcase Météo-France’s expertise regarding all of France’s Armed Forces.

Lightning detection specialist Météorage has shored up its detection network with that of its partners across other European countries (France, British Isles, the Benelux, Switzerland and the Iberian Peninsula), and pushed on with development of its multilingual digital services. Its annual turnover has hit the €3 million mark for the first time!

For Predict Services, which specializes in risk management assistance services and celebrated its tenth anniversary this year, 2016 particularly saw very positive feedback regarding its action concerning the springtime floodwaters from the River Seine in the Parisian area. It has also developed its activity in the insurance sector. In the latter half of the year, Predict Services launched an operational activity in France’s Overseas communities and elsewhere abroad, crystallized through the opening of Semaphore, the international watchdog for major hazard management.

1.1 Informing and raising awareness among citizens